You are here: Home » Amity, an original short story series part I 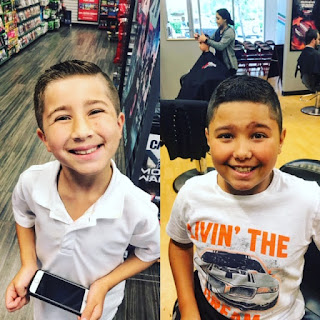 Christopher and Nico right after their fresh cuts. September 13, 2019

All my life I have been enamored by the movie, Jaws.  I watched it as a child and into adulthood.  Last year on a trip to Cuba I wrote a story about the town of Amity, post the shark attacks.  I hope I won't get in trouble for using the characters created by Peter Benchley but I have expounded on their lives with new characters related to them.  I enjoyed writing this story so much that I typed it on my note pad on my iPhone non stop for days in Havana, Cuba.  I would hate for this story to rot on my hard drive so I decided that this will be a series for my blog and my thousands of readers.  This is just the first one.  So, here it is, my story, Amity based on the novel Jaws.

Beneath the surface of the ocean lies an artifact that tells a story of the greatest shark tale that ever terrorized the sea.  The story is true and is greater than the fiction of  Moby Dick and more tragic than the Old Man and the Sea.  Forty-five years ago the fishing vessel, Orca, was sank by the largest great white shark, anyone had ever seen.

The Great White instilled fear, like the boogieman, into the minds of the people who lived on the tiny island of Amity.  Amity is an island off of Long Island, New York.  Mayor Larry Vaughn feared that the death caused by the enormous shark of 10-year-old Alex Kintner would stop the tourism industry in its track right before the big Memorial Day holiday.

“I’m only trying to say that Amity is a summer town.  We need summer dollars.” – Mayor Vaughn

So after the death of Alex Kitner and heeding the advice from the Chief of Police, Martin Brody and his expert from the Oceanographic Institute Matt Hooper, he got the town council to accept Captain Quinn’s bounty demand of $10,000.00.

“For that you get the head, the tail, the whole damn thing.” – Captain Quint

The town council wasn’t fond of Quint, but they knew his reputation as a hater of sharks that mercilessly tracked them down and killed them.   They would charter Captain Quint’s 42-foot fishing vessel, the Orca, and, with the help of the town police Chief Brody and Matt Hooper, would catch this man eating beast.

For 3 days Captain Quint, Chief Brody and Mr. Hooper went hunting this shark.  The great white was elusive and hope for the 3 were dwindling that they would ever find the shark that has been feeding on the tourists.  It was only after Chief Brody resumed his chumming duties that he saw the shark.  The fear in his eyes was chilling.  He knew they were over matched!


In the beginning there was excitement from Matt Hooper and Captain Quint.  One a lover of sharks and the other filled with hate.  But soon the excitement of discovering the shark would end because they would soon realize this was no average shark.  One by one, the shark plucked them off the boat like a cunning hunter.  The first person off the boat was Matt Hooper.  He chose to go in the water, while in the safety of his shark cage in attempt to stab the shark with poison.  But he was able to escape prior to certain death

“YOU GOT ANY BETTER SUGGESTIONS?” – Matt Hooper

The only one to die on the Orca was Captain Quint, a man who ironically survived the torpedoing of his Navy ship, the U.S.S. Indianapolis.

“So, eleven hundred men went into the water, three hundred sixteen men come out, the sharks took the rest, June the 25, 1945… I'll never put on a life jacket again”

Chief Brody was the last remaining soul of the ill-fated boat.  He took refuge inside the cabin watching the water rushing through the destroyed transom waiting for the boat to be submerged.  But the shark was smarter.  The shark launched its massive body into the port side of the boat.  The weight crushing the wood frame, smashing the port side windows and slid towards Chief Brody.  The sharks eyes were black and focused on its next kill.  Chief Brody reached for the compressed air tanks that Matt Hooper brought aboard.  He grabbed the large cylinder and shoved it in his mouth which made the shark back off.

Chief Brody never faced a foe as ruthless as this shark.  Not even back in his NYPD days as a police officer.  Chief Brody donned a rifle and then climbed the crows nest of the Orca that jettison towards the sky.  His weight bowing it down in to the dark sea.  Chief refused to be part of the tales of the souls that disappeared into the ocean.

He took aim at the shark.  The dorsal fin acting as a guide:

Come on, come on, Chief said

“SMILE YOU SON OF A BITCH!”


It isn’t exactly known where the Orca rests on the oceans floor anymore. Time and currents have covered most of her and moved the debris around. But there is a strong magnetism in a spot where parts of the boat were discovered years ago.  The latitude and longitude kept secret for decades.  It was only after there was a discovery of an uptick of sharks in the area that peaked the interest of shark enthusiast.  Which is unusual for the area since sharks don’t migrate there.  When the tourist boats went there the navigational systems and GPS was covered by a strange magnetic field creating chaotic readings.  Eventually residents of the island stopped providing day trips to the area.  Locals wanted the search for the boat to cease due to the mechanism of how the boat was sank and fear of all the sharks that were coming to that part of the sea which would cause their summer time dollars to recede.  Amity's true bread and butter.

It was determined during a winter council meeting that the practice of shuttling gawkers and divers would stop by the next summer of 1984.  The one thing they could all agree on was that the best place for the boat and all its remains was to leave it all under the sea.  And all it's secrets rest in peace.
But try as the town council might, to suppress the gossip, word had gotten out that sharks from all over the world were migrating to the site.   Most divers have used the uptick of sharks presence in the area as an indicator of where the Orca rests but since the presence of sharks have increased and many sharks have become aggressive most divers have not gone in the water to explore for the Orca any longer.  They mostly dive 30 miles to the south around another ship that was sank to be used as an artificial reef.

Locals, especially the town council, likened this type of talk, that sharks from around the globe were holding a vigil to the king of all sharks as a martyr who was killed by humans, only a fantasy like, Mermaids, the Kraken, and Davy Jones Locker.  A tale of the sea from sailors who sailed for months on end.

The town council, the residents would rather keep the past in the museum they erected to honor of those who died so many years ago in that summer of 1975 and wish that most people would move on.

Unfortunately, the towns wish was about to end and they were to be thrust into the forefront again. 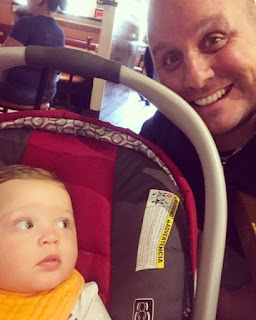 Captain Imperfecto and his new son, Blake at Chilis. September 22, 2019.