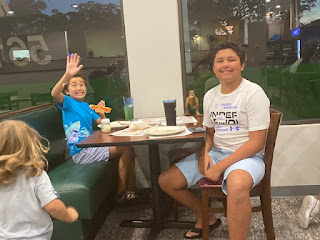 I suppressed the trauma that occurred a decade ago by avoiding my thoughts of the incidents in my desire to feel normal again. If you think avoiding it was good in order to move forward lets see who would want to be like me.

Over the last 10 years I have been going about my daily life as though nothing bad had happened to me. Isn’t that ridiculous? To assume I could just forget about being human? I mean, I got to the point where I would talk about my past trauma to people and I was proud of myself because I thought I was a strong person for doing it.

Self thought- “Look at me, this bad ass cop moving on with his life after losing 2 kids and then my wife, nothing to see here.”

These traumatic incidents weren’t a small thing but I didn’t think I was deserving of such pity so I underplayed it. The first trauma I experienced was never addressed and the 2nd trauma took 2 years of my life away because I couldn’t deal with the future so I paused my past. I struggled to cope with the bad hand I had been dealt but felt undeserving of being helped because I felt other people were more deserving than me.

Man I mentally beat myself up.

The fear, anxiety, and sadness of not being able to control my fate in those traumatic times took its toll on me and whittled me down into nothing. How foolish I am to think that I could simply throw human emotion aside.

There is nothing to see here.

There was guilt, anger, frustration, and bouts and bouts of extreme sadness during my era of trauma.

God, what an awful experiences it was over those years back in 2006 and 2012. I thought I had worked it out and understood what I went through but now it seems that I didn’t beat anything. During that period I had enough and was desperate, near my wits end, to feel normal again so I rushed the process of coping. I put my guards up, forgone victimhood and beat my emotions into submission, in order for me to climb out of my hole and to feel somewhat normal again. But in reality, all that work I did for myself was to fight this trauma, not heal. I wanted to beat this beast, to knock the hell out of it, so I could live a functional life by forgetting the deep aspects of the incidents. But now it seems as if that struggle to hide was all bullshit. Recently I exposed my charade to myself and realized I had forgone my counseling to place my emotions on pause to suppress my thoughts and ignored my pain and the peace I obtained was only temporary. I hid behind my mask by burying myself in work, school and kids.

I did what I had to do in order to move forward and survive. I couldn’t live that way and yearned for normalcy. The struggle back then was real so wouldn’t you rather bury it then face it?

I didn’t expect that 10 years later that emotional cap would be ripped off allowing the demons to rear it’s ugly head. How could this be though? I beat my emotions, so I thought. I moved on, didn’t I? I rebuilt my life, isn’t this evident?

How could this range of emotions happen to me, yet again? Well, read above again and you’ll know.

But what happens when that emotional band-aid is ripped off?

Well, fast forward to 2022 and it turns out one police call would tap into my mind and unleash those emotions like a well shaken carbonated soda.

I responded to a frantic 9-1-1 call. A family was in a crisis. They were in the middle of losing their child, they hadn’t known it yet, and CPR was being performed. He was a little boy, a toddler, living his best life that was tragically coming to an end in a horrible accident. And I responded to it. Although the circumstances of this family’s life were different than my situation I could see our emotions were headed on a paralleled path and I understood what was about to happen to them. It’s a hell of a thing to witness a families undoing in real time. The emotion in the air smelled familiar and it activated me internally.

I was professional and did what I am expected to do for the family and child but it was breaking me inside. And continues to break me now. But why? I don’t know them. It has nothing to do with me or my situation or my current life. Didn’t I beat my trauma? Besides, I don’t get involved like this. I teach this to recruits how to understand emotion. I stress to new officer’s to empathize and don’t sympathize. It’s for one's own mental health. And yet I’m drawn in. I want out of it. I want to escape. It’s easier to read the headline and scroll past it rather then to be knee deep into it.

But here I am being the professional. Doing my job. Along with so many other wonderful men and women on this chaotic scene rooting for him to breathe. I want him to survive. I have a little boy his age. And I know that it’s not going to happen for them.

The worst fears were met. Their little boy won’t return. I hope they grieve. I hope they work it out and learn to cope. Don’t suppress it like me. Don’t hide it like me. Live it so you can control it so you’ll never have to face that horrible moment again when you least expect it. Don’t be like me. 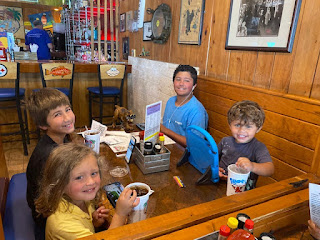 The boys at another on of our favorite places to eat as a family. Blake, Christopher, Jr., Nico and Max July 23, 2022.

Find us on Facebook: The Adventures of Captain Imperfecto
https://www.facebook.com/TheAdventuresOfCaptainImperfecto/